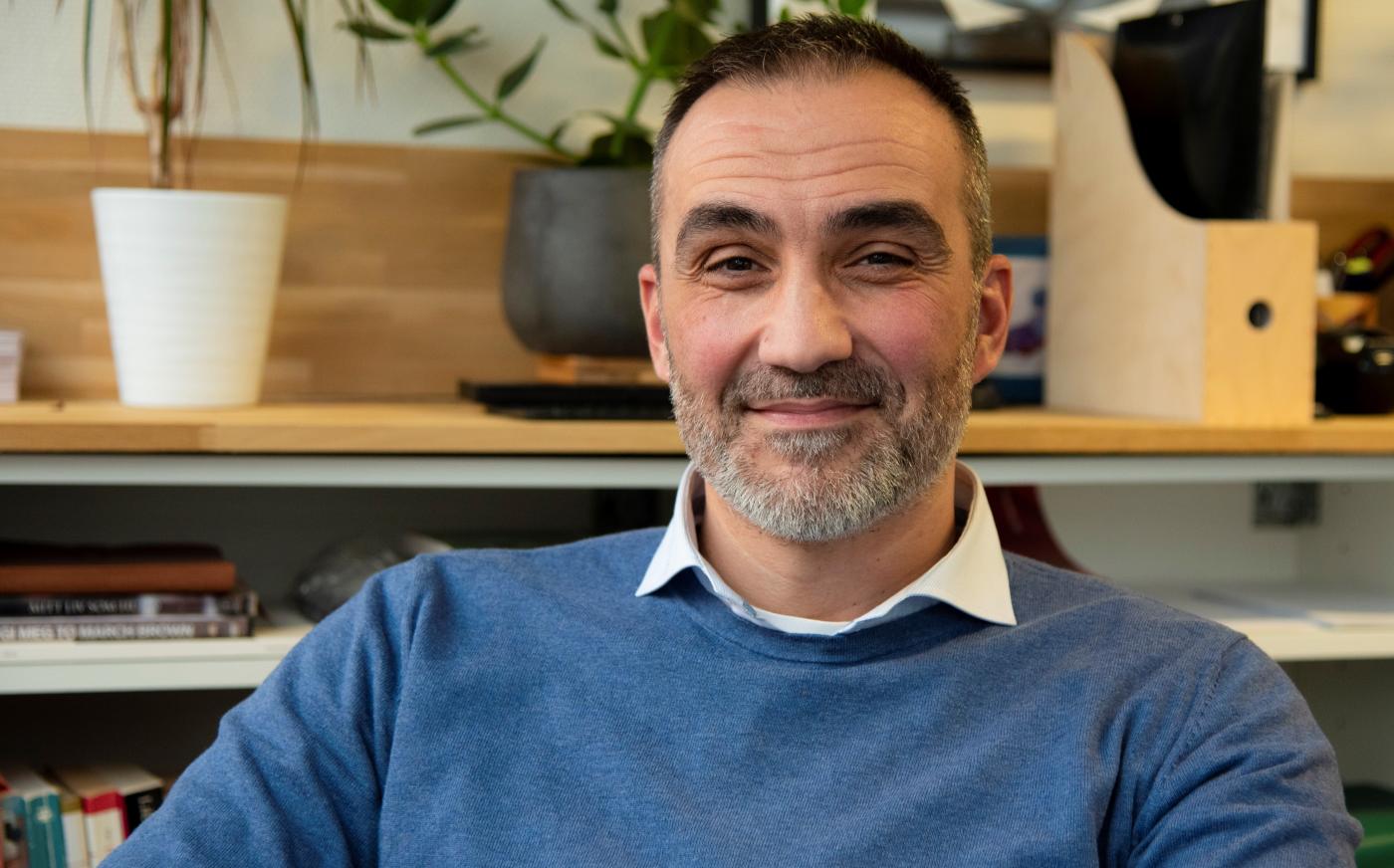 To be forced to flee is to be in a major crisis. “Being a refugee means a huge loss of control and identity. It is a very threatening experience,” says psychologist Zemir Popovac. He came to Norway from Bosnia as a war refugee in 1993.

No matter what psychologist Zemir Popovac lectures on, he wants his listeners to develop a personal relationship with the topic and link feelings with understanding.

When he talks about the complicated concept of post-migration living difficulties, he likes to use this exercise:

«I ask people to draw an outline of their hand on a sheet of paper. Then I ask them to write one of their identities on each finger. In other words: Who are you? It forces you to think: What is it that characterises me? What are the roles that describe me?»

Some may write «football coach», «girlfriend» or «good neighbour».[/vc_column_text]

Then Popovac asks them to put the sheet aside. A little further out in the lecture, he asks them to bring out their drawings again – and cross out one finger:

«Then people have to accept the idea of losing one of their identities. They must try to understand how it feels to lose that part of themselves. And when you sit there and cross out one identity after another, you can feel a knot forming in your stomach.»

He graduated as a psychologist from the University of Oslo and later specialised in clinical adult psychology. He worked for many years in the specialist health service.

We meet Popovac in the offices of Favne Psykologbistand, located in Oslo city centre. Popovac helped start this private clinic six years ago. Today, nineteen psychologists are associated with the company, which among other things cooperates with several districts in the City of Oslo.

«Refugees living in Oslo are referred to us when the district is concerned about the individual’s health. Then we see if there is a need for professional psychological help or if psychosocial measures should be implemented,» he says and adds that they don’t just work with refugees.

In addition to treating people, Popovac lectures on various topics related to psychology and mental health. Now, he has been appointed to a position of trust in the Directorate of Health as a member of the academic council for equal health and care services for the immigrant population.

«It was quite by chance that I also started giving lectures on post-migration living difficulties,» he says and leans slightly back in his chair:

«A colleague asked if I wanted to speak at a conference, based on my own background as a refugee and a psychologist. I thought, ‘Okay, just this once – but what should I talk about?’ So, I studied the research on post-migration living difficulties and found that there is a lot of knowledge on the subject. But this knowledge is not being put to use by the people in power, our politicians. It’s almost scary.»

It is difficult to talk generally about the trauma and stresses experienced by displaced people. People have many different experiences and very different reactions – their psychological condition has a big effect. But it goes without saying that being forced to flee is a traumatic experience and very stressful, with lots of uncertainty and pain.

«You say that being forced to flee is to be in a crisis. But doesn’t it also begin with a desire to escape a crisis?»

«Not everyone flees right when the first shots are fired. Most people wait,» he answers and explains that, at first, we are almost in denial about the situation. «Even though the situation is very overwhelming and dangerous, we have trouble accepting that there really is a crisis.»

Not everyone flees right when the first shots are fired. Most people wait.
Zemir Popovac

«You have thoughts that lead to refusing to see the terrible reality. This causes many people to live in dangerous situations for a long time simply because they think it will all blow over. You think that they won’t shoot at the civilian population, but protect you.»

«It is a very big thing to fully understand that your is life falling apart. You are desperate to believe that things will turn out well. That someone will come and restore or re-establish the order you were part of.»

In other words, things must have gone quite far for people to decide to leave everything. At that point, it’s about saving your life.

«Some people flee on their own?»

«That brings with it some extra difficulties. First of all, leaving your family is a great strain. Secondly, you feel a responsibility to do something for those who stayed behind. Like sending help. Thirdly, you have feelings of guilt: ‘Why me?’ Some call it ‘survivor guilt’. You have survived, and for that you pay a high price,» says Popovac.

He explains that being displaced is a kind of transitional phase where you cannot plan your life. You feel like you are at the mercy of your surroundings, submitting to circumstances over which you have no control:

«It’s a very threatening experience. We all want to be in control of our own lives. At least, we want an illusion of control. Being forced to flee is a huge loss of control.»

So what do you do to get through this transitional phase? The psychologist says that you create a kind of narrative for yourself. Most people do so by creating a hope. You simply assume that things will get better when you arrive.

Being forced to flee is a huge loss of control.
Zemir Popovac

«Often, these are difficulties that are related to being out of work and losing touch with the social roles that you had before. You experience that your skills, knowledge and competence – your identities in this new country – are not confirmed and acknowledged. Even if you have an astonishing amount of knowledge,» the psychologist says.

Then you become a kind of non-person. Popovac usually uses a quote from a refugee who one of his colleagues has worked with: «I live here, but I don’t exist.»

This is something that sneaks up on refugees:

«Everyone has a kind of expectation of being the same person in the country they come to. ‘I want to be myself.'»

I live here, but I don’t exist.
Said by a refugee in Norway

They are not aware that your identity and understanding of yourself is, in many ways, a social construct maintained by all the relationships you are part of. When you lose the network of people around you, who see you in a particular way, have stories about you and with you – to lose all that – is like losing a kind of mirror.

«You are left with a mirror showing another image. A new identity. Now you are just a refugee. A Syrian. A Muslim.

«All these categories bring with them associations in those who meet you. Associations that you have no control over.»

Losing your grip on yourself may cause a number of symptoms such as low spirits, depression, social avoidance, social isolation, loss of appetite. Some people may also develop anxiety. An inner turmoil emerges, which makes it difficult to continue feeling like things are predictable, under control and possible to live with.

Popovac believes that when ethnic refugee groups seek out each other in a new country, it is not because they are not interested in integrating or because they have something against the host community.

«They have a psychological need to meet others with the same history and background. People who can confirm identities in a different way than the host community. You just need some kind of air bubble where you can breathe,» says Popovac. He uses the Norwegian Church Abroad as an example of an important meeting place for Norwegians in foreign countries.

Each person is different and has their own problems and difficulties. Psychologists base their approach on the individual.

«Traumatised people are unhappy people. We try to help people feel more assured, to normalise and lessen the burden some of the difficult feelings that seem threatening.»

When it comes to post-migration living difficulties, Popovac says it’s about finding out and showing interest in what people can do. What were they concerned with, what interests did they have? Telling stories about themselves – everything from hobbies to cultural monuments in their home city, or something that they can relate to their identity – has a revitalising effect.

«In the public debate, we often talk about integration without considering what that term means in practice. In order for something to be integrated, it must be included. It’s as simple as that. If something is to be included, it must be acknowledged.»

«The main premise of integration is really acknowledgement. An acknowledgment that ‘the other’ also brings with it something that is slightly different than what I have, but still valuable and important.»